After waiving 18% VAT on new construction purchase, by offering citizenship to foreigners who invest $250k in real estate, Turkey now welcomes foreign investors like no other country on earth. Given the high growth of the country and benevolent attitude of authorities towards outside investors this is a good opportunity. The recurrent bouts of currency devaluations and inflation entail very high currency risk.

A Brief History from Ottomans to Ataturk

Every nation finds a reason to be proud: the US had military and Economic supremacy for a hundred year, the British ruled the seas from 1720 to 1920, the French were the first power in Western Europe from 1630 to 1815, the Spaniards were the greatest world power from 1500 to 1600, Russians would claim superpower status and continuous expansion from 1700 to 1945. I will try to convey below how Turkey came to carry the history of its people. 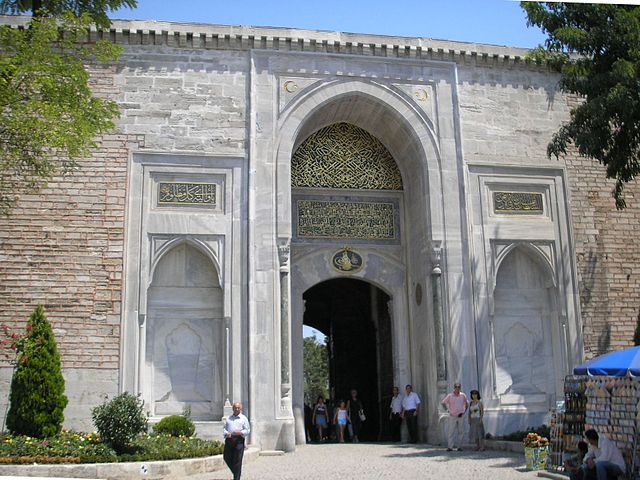 For historical perspective, it will be sufficient to recall when the Turkic people arrived, and the WWI crisis that led to the foundation of the current regime.

The Ottomans rose on the frontier of the Byzantine Empire 150 years before taking over Byzantium. Their power grew rapidly to a maximum under Suleiman the Magnificient in the 16th century. This was followed by a long struggle against the Russian and the Austrian Empire.

The Ottoman Empire was the seat of the Caliphate from 1517 to 1924. It claimed religious authority over all the world's Muslims.It seems to have stood for more moderate form of Islam than what was to follow in oil rich countries.

In the late 19th century, the Empire lost territory to separatists in the balkan and in greece whose Christian majority ressented the muslim rule. Some movements such as the Young Ottoman supported modernity and secularism. The conservative forces of reaction lashed out against Armenians and Jews that were seen as enemies of the state. While the Ottoman state had been more tolerant than western states when it was powerful, it became intolerant as its survival was at stake. During WWI, the Ottoman Empire allied with the Prussian and Austrian Empires against Russia and the Western powers.

After the armistice, the allies began occupying and partitioning the empire following a web of secret treaties that had been woven during the war. While the Turks could not keep control of Syria and Iraq, Ataturk, a nationalist leader of Turkish independence avoiedd the dismemberment mandated by the treaty of Sevres while Istanbul was under tight allied control. This was concluded by treaty of Lausanne in 1923, and the creation of the Republic of Turkey. Ataturk and the turkish army obtained such political capital from the war that they could engage on a vast project of secularisation of Turkey:

From Multi-Cultural Empire to Homogeneous Nation

A series of deportations, march to the desert followed by expropriation of those who exiled was carried out against Armenians in 1915-1923 as they were accused of being an enemy within who sided with Russia against Turkey. These acts are described as genocide by Armenia, Russia and USA whereas Turkey denies that the actions constitute a genocide and passed law against such label being anti-turkish speech that are still in force. Turkey had again recourse to confiscation of property in 1942 by levying a wealth tax at rates below 4% on muslims and above 100% on jews and armenians.

Istambul, oriental capital of the Roman Empire has a long history as an Asian and European hub and as one the first cosmopolitan city. When the Ottoman empire was dismantled, populations moved across the new border and the Turkic people regrouped. Still, more than half of Istanbul population was Greek, Jew or Armenian before 1955. Most of them left the country following the anti-greek riot at that time. Istanbul population was 1 million, since then Istanbul has grown to a population of 15 millions.

In the last 20 years, Turkey's development indicators are good and its economy improved markedly. Growth is less regular since 2010.

While populism and identity politics are ever present themes since the republic's origin, Turkey's latest president Erdogan has a strong personality on par with US president Trump, and their antics designed to capture the attention of international media is viewed with concern by conventional and business circles.

A failed coup attempt in 2016 by part of the army that claimed for more secularism and democracy (the usual mandate of the army since Ataturk is to act as guardian of the country's fundamental laws) led the government to ask the US to extradite a Turkish exile. As the US refused, in 2017, Turkey detained a US evangelical pastor who had links to that anti-government action. The FBI captured the deputy director-general of Halk Bankasi, one of the big Turkish banks when he landed in New York for a bond roadshow. The pretext was that the bank dealt with Iran under US sanctions. Since then, the US state department has softened its stance but the DOJ, after being weaponized by the US executive appeared up to Oct 2019 to act out of control long after the two leaders decided to shake hands. This bullying by the US has shaken the Turkish Lira exchange rate since 2017. 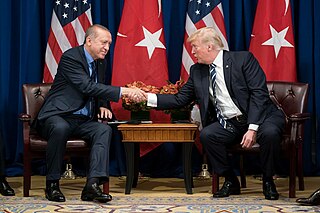 Turkey political risk features a religious as well as nationalist component. Its economic situation will evolve independently from those other countries whereas Eurozone countries are now systemically linked.

Turkey was toppled by military coup in 1960, 1971 and 1980, and the military sometimes intervenes in politics. It lacks the stability of New Zealand and Switzerland.

Population increases and an increasing proportion of the population is living in mega-cities. Turkish cities is an overwhelming topic. I will concentrate on three markets that expats often deal with:

Antalaya and Bodrum: Real Estate as a Lifestyle Choice

Hiring a gardener to maintain your swimming pool and garden is going to be cheaper in Turkey than in Italy or St Barth.

Turkey's economy has the following caracteristics:

GDP numbers show that Turkey truly is a developping economy, and if it keeps growing above 5%, it will catch up quickly. Therefore, investing in Turkey is very different from investing in Greece: the Turks have the feeling that their economy is going somewhere since the last 20 years.

High Cost of Financing: a comparative advantage for cash buyers

The fundrise strategy is suggesting to stay liquid for now and keep dry powder until after the liquidation when good deals have blossomed. Given mortgage rates levels, Turkey gives a comparative advantage to unleveraged investors.

The rent is typically reevaluated with inflation, but tenant may negotiate it down if the market prices are not following it. So inflation heightens the severity of yield trap if one buys in an undesirable location: 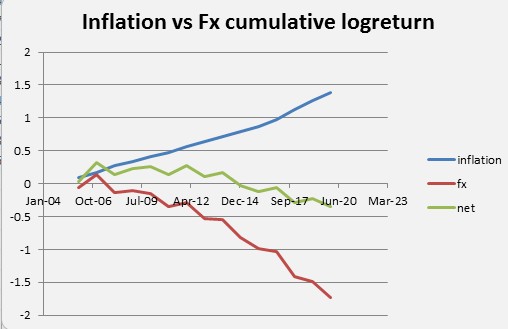 The mortgage rate is around 12% making property very hard to finance for homeowners. Homeowners end up borrowing only for 10Y and paying back as quickly as possible. Such high rate are needed for lenders given inflation between 7% and 16%, but for home buyers, it makes housing less affordable and investors also eschew financing.

This represents a massive headwind for real estate prices, and points to a potential for future tripling in real estate real prices, should the inflation be tamed. If other countries situation is a guide, expensive real estate, being the most volatile and subject to leverage will increase in price first.

In the US, a city reaches a critical size to have all kinds of competitive services with 1m population. As cities reach that size, the economic opportunity tend to become a regional or a national attractor. The same seems to be happening in Turkey but with much higher growth: fast growing cities such and Antalaya grow very fast, whereas Istambul, despite going above 10m is still growing above 3% per year.

The housing index data for Istanbul is harder to get than in the US. House prices expressed in TRL have in the last four year. This implies a large loss in USD terms: 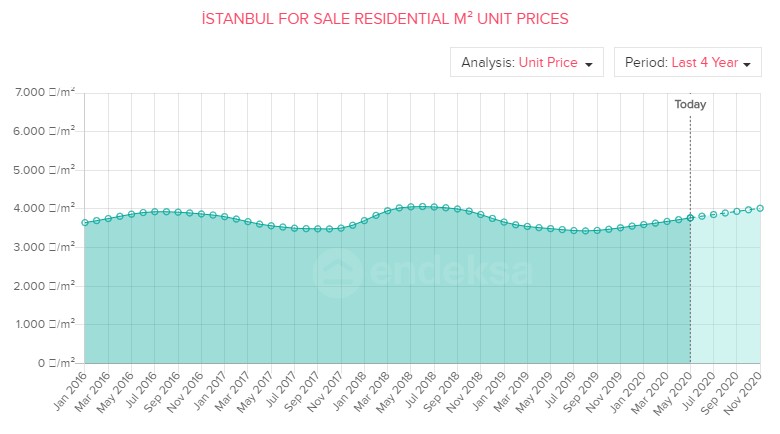 We see below the areas of Istanbul that have highest prices: 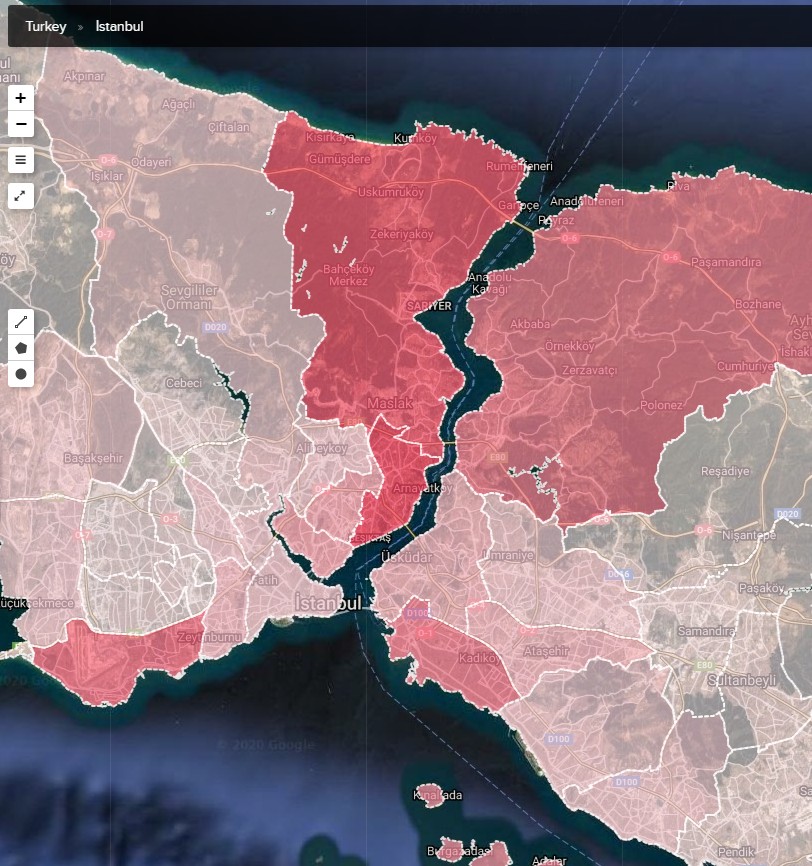 Turkey is a relatively high tax country as bands are reached quickly and deductions are lower than in the US. It can be summarized as follow: