According to this Zillow Research blog article featuring a golden retriever and a smiling lady on the lawn in front of a house, affordable homes are now appreciating faster than top priced homes in 50 metro markets as well as in the midwest. The exception according to the article is Austin TX (Joe Rogan effect?).

US Tendency for Baumol Cost Disease

In the US, house price appreciation is most visible in areas where land is constrained, but most reasonably priced markets used remain affordable in the last 20 years. There was constant inflation in two other economic sectors: Healthcare Cost and College Tuition Fees were increasing.

Arguably, over the last 20 years, US GDP has been growing because more production was delivered per worker in all sectors except these 2 sectors. While Amazon warehouse employees became more and more productive at packing and shipping, university and hospital work was not reorganised in a way that improves their productivity as quickly. The rise of forced expense has Americans them to work more and increase the American GDP to obtain the provision of education and healthcare whereas European and Japanese did not experience cost increase in these sectors. The European and Japanese GDP did not increase as much.

This effect was described in the 60s as Baumol Cost Disease, after the eponymous Princeton economics professor. Cost of good and services produced by the least productive sectors rise faster than in sectors where productivity rises,

Housing cost inflation did not increase as much as tuition or healthcare, meaning that construction worker productivity was increasing, This might be changing now as low rates and high demand for suburban housing rises in low tax states.

A general contractor I work with in Florida told me that since last year, timber price, copper price and many prices of components that go into homes have multiplied by 2 to 3. Labour cost, which is a significant portion of the house price has remained controled, as wage inflation is still moderate but the cost of material is having an impact on new house prices.

This is pushing the price of new construction up.

Also section 1031 exchanges, capital gains deductibility will be capped to 500k. Section 1031 exchange rule is a IRS rule allowing rental real estate investors to sell a rental property and buy a new one while deferring tax. Deferring tax is very important as growing your capital at 10% over 30Y and getting taxed 50% in the end is very different from growing capital at 5% for 30Y.

High capital gains should slow down investment cycles in America. It used to be that people could exit anywhere between 1Yr (long term CG) and 27Yr (end of depreciation). People will not exchange property when there is a good opportunity because of the higher tax hurdle.

In any case, this makes smaller price SFH more desirable as they are less likely to fall under these provisions.

Due to inflation expectations raised by the stimulus, demand for hard assets including homes has raised substantially. In the meantime, commodity inflation has raised the cost of new construction, which acted as a cap on existing house stocks in areas where land supply is not constrained. 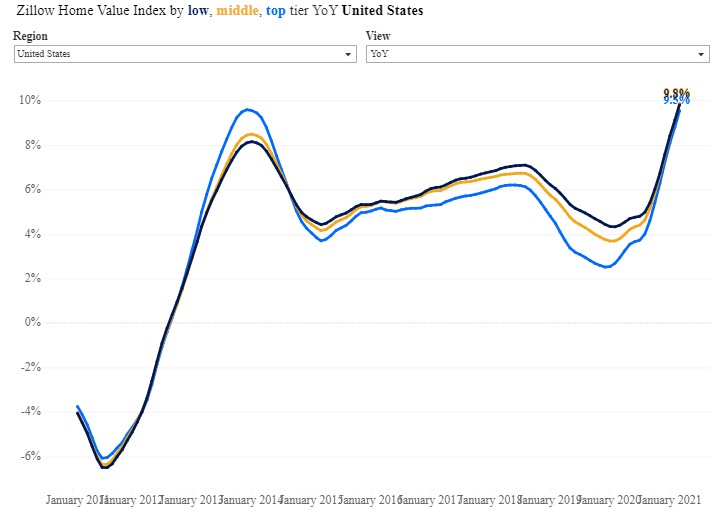 This graph shows an early and faster recovery of posh properties first in 2013 (similar to what we observed in London) followed by a slow catch up of 2% of increased annual yield for starter properties since 2015. Looking at the data, it seems that everything is melting up and not just affordable housing.

Following this article, I saw affordable homes gain 5% in the first week of April, this is a very large increase that is not visible in the Zillow graph yet. My interpretation is that credit is still easy with high LTV, so that first time buyers may easily bid up a house from 200k to 230k. 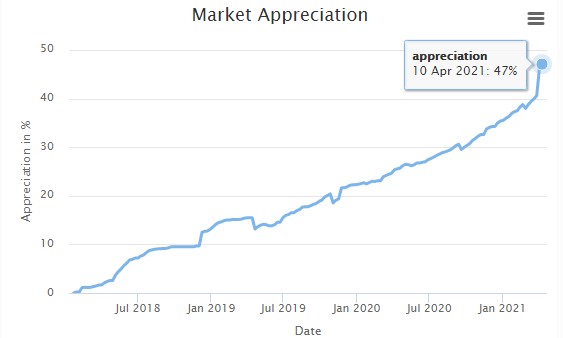 source: own portfolio. An anomalous 7% spike on a house portfolio appreciation curve

On the web this month: Schroeder on UK home as investment