On the back of central bank quantitative easing measures and globally repressed rates, investors are left to wonder why gross yields on US rental real estate have such a broad range. Given the choice between 4% and 14%, what real estate yield should one target? Are those differences giving an indication of how much growth estimates differ or is this a premium reflecting risk for higher yield properties? Should one spurn those higher yields in the hope of better or faster profit from price increases?

Past Evidence of Capital Appreciation

House price make a great subject for small talk, one will often hear poorly researched opinions. People are quick to boast that they made a good profit on a property acquired in the 70s. Investment experiences are remembered for their salience, and few people would actually check in a spreadsheet how well that house appreciated against inflation, and how much it cost in taxes and maintenance.

One would expect that the markets that are the most prone to appreciate are attracting speculation and are also the most volatile. There is, however, a strong asymmetry in market moves. There is some anecdotal evidence that top locations (such as Manhattan) will hold price better amid a lower volume, whereas wannabe upcoming markets (such as Phoenix AZ) will quickly correct in case of crisis.

The main causes of a rapid price change are: easing in the financing rates available to residents; gentrification through the installation of new infrastructure or new employers. The general rise of the median incomes is a much slower phenomenon.

It is obvious when looking at areas where houses built in the 60s sell for $100,000 and areas where similar ones sell for $2,000,000 that one area must have appreciated more and that it is where the largest capital gains have been made.

Areas with no shortage of housing and less access to finance show little inflation-adjusted price change over the years. For this reason, the narrative affixed to differential appreciation is often linked to questions of affluence of its population. We will look at income stratification and neighborhood ranking. 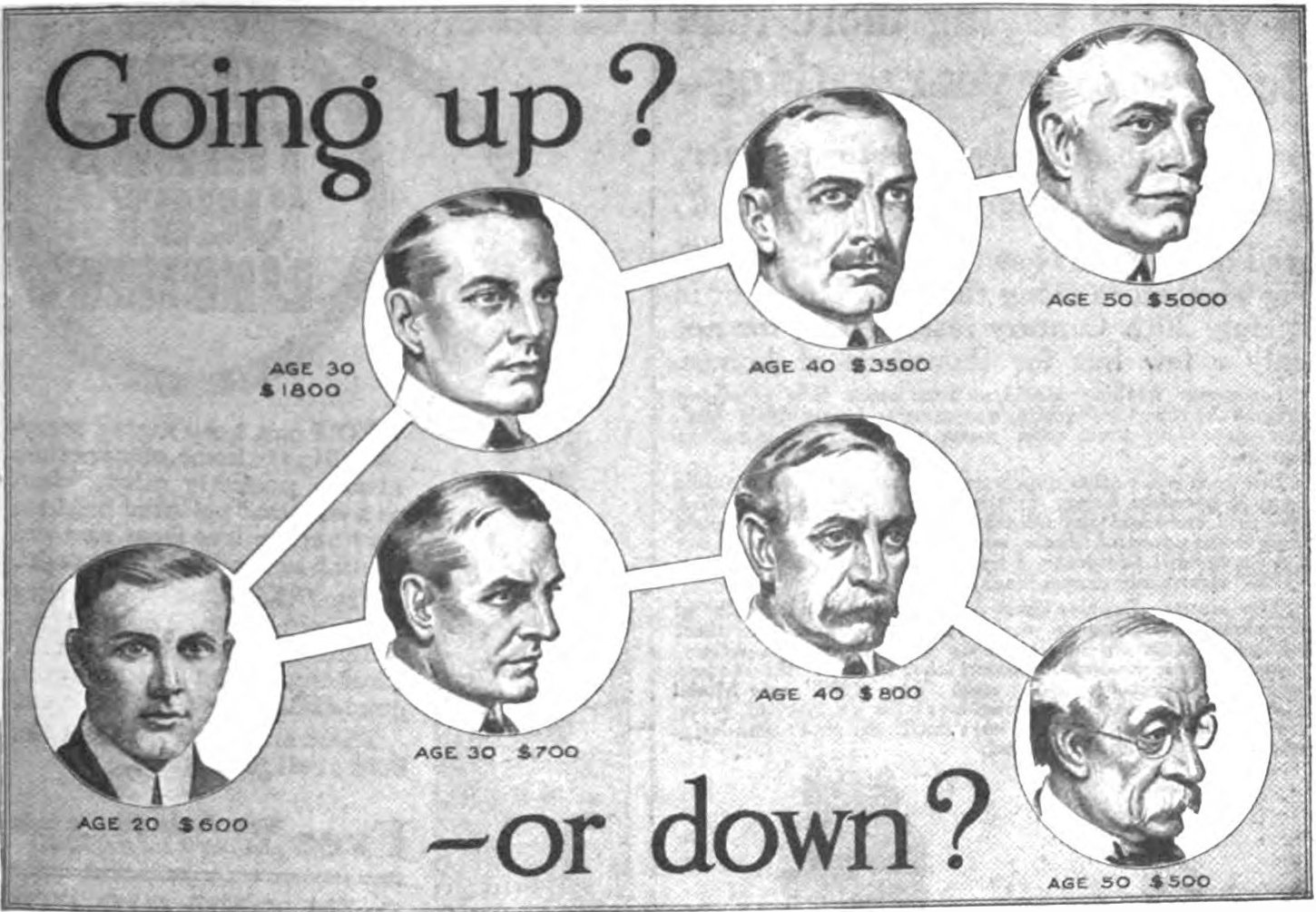 Conflating success with wealth creation has always been the next New thing in the US: Illustration from a 1916 advertisement for a vocational school in the back of a US magazine.

Neighborhoods are customarily graded with letter A, B, C or D. There is no fixed rule that determines these categories, or even what criteria are used. We venture the following definition:

While "urban core" could conjure images of walkable areas with boutique shops, or retail chains such as Neiman Marcus, the sad reality is that "urban core" has come to designate a less fortunate consequence of American suburban development.

For our purpose. the following criteria can be quantified and should be relevant:

We expect the determinant between A and B to be a mix of median income levels, school ranking, and percentage of owner-occupiers. Between B and C, it becomes unemployment income, the prevalence of single-parent households. Between C and D, it becomes the unemployment rate, vacancy rate, crime rate.

I read that the percentage of owner-occupier was a relevant metrics. National ownership rate stands slightly above 62% and is very stable since the US mass produced houses in the 50s. We may see A neighborhood to be almost exclusively owners. The measure does not seem very relevant, however, since, D neighborhood with lowest quintile income and murder and assault rate four times bigger than the US average can still have 60% to 80% owners.

House prices are driven by what people can afford. The US household income quintile work as follow source:

The mapping between neighborhood grade and quantile is not exact: as each grade may correspond to several adjacent quantiles, and one should expect some population overlap.

Inequality in America is rising. As the top incomes are rising faster, properties that appeal most to this population will appreciate faster. 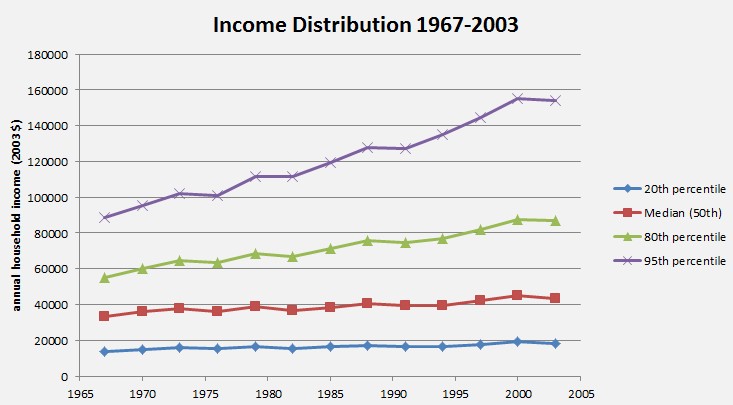 data in real dollars (2003) from the US census bureau

To quantify the size of this divergence we check the annual increase in quintiles income since 1967. The long-term increase in real income appears relatively steady. The difference in annual income increase is only 1%. 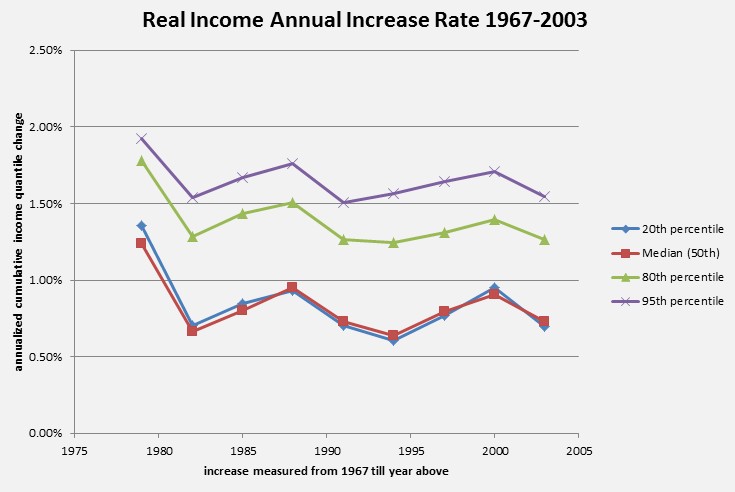 The income divergence might be much higher between the top 1% or top 0.1% Americans and the 99%, but arguably, these top quantiles are demographically too small to impact society and its total available housing stock significantly.

The implications of this data are wide ranging. Rental yields in the US vary from 4% to 14% gross. Net yield is half that, and the income divergence measured above would only explain 1% of this difference of yield.

Assuming constant affordability, to invest in houses attractive to the top 5% makes sense if the income growth differential with lower income quantiles equates the difference in net rental yield. As this difference in income is only 1%, whereas rental yield difference is as much as 10% gross (and maybe only 5% net) the necessary corollary is that that housing for the top 5% is becoming less affordable when comparing the price to income.

One should note the effect of lower nominal rates on perceived affordability. A common cause for housing stock in limited supply prices to increase quickly is lower nominal mortgage rate. Lower nominal rates allow much lower monthly repayment on a mortgage, pushing the price to income ratio higher. This effect is greater where the resident has access to finance.

Decreasing nominal rates for the last 20 years has caused the affluent to buy houses at increasing prices thanks to lower cost of servicing the debt. Since the 90s, the emergence of China as a low-cost industrial export giant has put deflationary pressures on all developed economies, pushing rates down. Low rates may stay that way for long. What is not clear is whether rates will go much lower. In this case, further price appreciation beyond the 2% secular income increase will have to come from disposable income.

Just as celebrities are persons who are well known for being famous, the propensity for markets to reinforce trends is a hallmark of informational inefficiency. Many investors just pour more money on assets that have performed well and disinvest from assets that have weaker performance. This rule is actually optimal when markets are trending.

Will the trend continue? As rates have gone from 14.6% to 1.7% in 34 years, a whole generation grew up seeing home prices increase. Is it as likely that they go down a further 13% over the next generation? US Rates might go further down to 0% and below as in Europe and Japan, allowing a further rise in owner financed A-B properties and further profits from capital appreciation. After that, that low rates should limit house value appreciation, especially for the most expensive and least affordable properties.