An Economic Geography of the United States

In this November 2016 article, Nelson and Rae propose a partition of the United States into megaregion based on clustering analysis of 4 million commute routes. 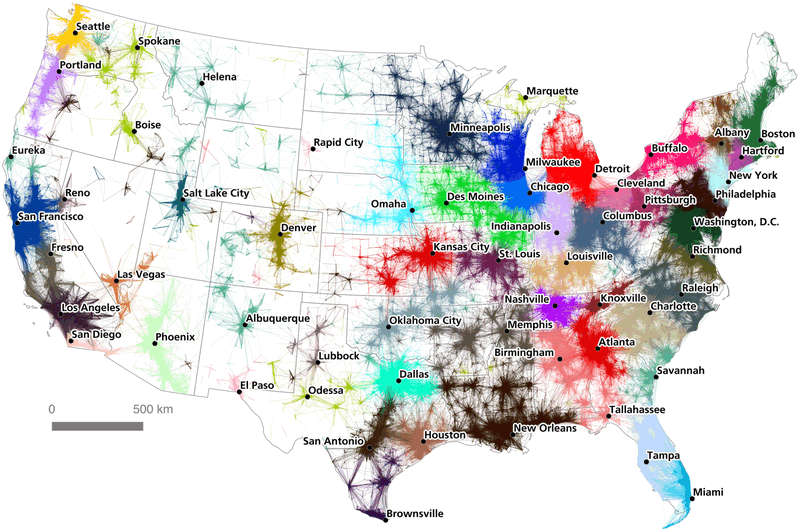 The authors explains the difficulty of reaching a clear-cut definition: an automated algorithm may come to rely on insufficient data, leading to boundaries that change too much through time, whereas a human cartographer's definition entails some arbitrary choices.

The article quotes the assertion that "knowledge is only gained through orderly loss of information". Don't miss the mise en abime implied once one questions how orderliness is known.

In any case, the algorithmic map and the human made appear to agree substantially. This map shows 55 cities that form nexus of commute routes, the regions around these cities are economically connected.

The next step as an out of state investor is to consider the potential of each given region, as given by its size and long term demographic evolution, and affordability, for this, we will consider area partitioning that allow more details.

Statistical Areas defined for US Census

Analyzing commute routes to identify economic ties is not new. The USOMB (U.S. Office of Management and Budget) which gathers census statistics is using this technique for its definition of MSA (Metropolitan Statistical Area) along similar lines. There are also Micropolitan Statistical Area, that define economically connected rural communities that do not have a large city as a nexus point

The MSA are then combined into CSA (combined statistical areas) as some criteria of economic interconnection are verified.

There is much to say about a beautiful visualisation, and the CSA map does not look as attractive to the human eye as the above Mega-region map:

CSA population changes at a slower pace than their constituent MSA due to averaging, we show here the most dynamic CSA with a population above 500,000. The data was obtained from wikipedia in Dec 2016.

It should be noted that a 5 year evolution is enough to show a trend. For instance, New Orleans population rebounded following the 2005 Katrina disaster, so that the 2010-2015 evolution paints a much rosier picture than 2000-2010 would.

The MSA map looks as follow, these areas, though still very large show even more disparity in population evolution that CSA.

Putting the data together allows to check that the long term trend is persistent, and get the top areas in the US: